Navjot Singh Sidhu has been a busy man lately. Not only is he making headlines, he has also been craftily laying the groundwork to cement his position in the Congress and emerge as a strong adversary to Punjab Chief Minister Amarinder Singh.

With speculation rife that Sidhu is being projected to take over as the party’s state chief, the former cricketer spent the entire first half of Saturday cosying up to senior leaders from the state while AICC general secretary and Punjab in-charge Harish Rawat, barely a few kilometres away, attempted to placate a fuming Captain who had on Friday warned of a split in the party if Sidhu was promoted.

Sidhu said after the meeting with leaders from the Punjab Pradesh Congress Committee, including Punjab party chief Sunil Jakhar, that ‘conversations with wise men were worth months of education’.

Sidhu has been at loggerheads with Punjab Chief Minister Amarinder Singh, as he attacked him over the alleged delay in justice in the 2015 desecration cases. Singh on Saturday met AICC general secretary and Punjab in-charge Harish Rawat, a day after he wrote a letter to Sonia Gandhi, making a case against giving Sidhu a key post in Punjab Congress.

“Seeking guidance of Presidents of the illustrious Punjab Pradesh Congress Committee … Conversations with wise men, worth months of Education !!,” Sidhu said in a tweet, as he shared his pictures from the meeting with the leaders, including Punjab party chief Sunil Jakhar. 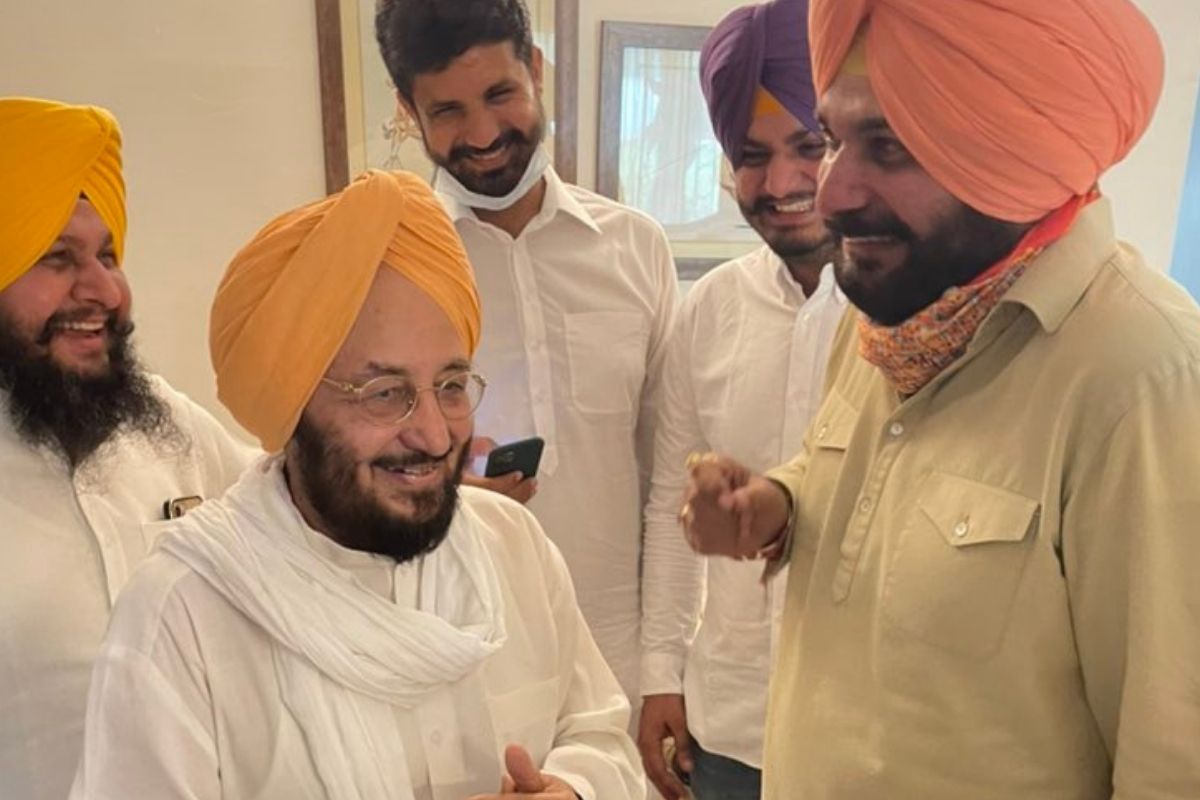 After the meeting, Navjot Singh Sidhu said ‘conversations with wise men were worth months of education’. (Twitter)

Amid reports that Sidhu could be made Punjab Congress Committee chief, party sources said that his meeting with Jakhar is being seen as an attempt by the cricketer-turned-politician to bring all on board before the proposed announcement.

Pictures of the two leaders hugging each other surfaced on social media. Jakhar termed this meeting as a courtesy call. Describing the visit as a welcome sign, the unit president said that the party has to put a united face in the 2022 assembly elections.

Amarinder Singh said on Saturday that any decision taken by the Congress president will be acceptable to all, after meeting Harish Rawat. Rawat flew down to Chandigarh as tensions escalate in the Congress’ Punjab unit over differences between Amarinder and Sidhu. The chief minister was later quoted by his media adviser as saying that he had a fruitful meeting with Rawat.

“‘Had a fruitful meeting with @harishrawatcmuk. Reiterated that any decision of @INCIndia Presdent will be acceptable to all. Raised certain issues which he said he’ll take up with @INCIndia president,’ @capt_amarinder,” the official tweeted. Rawat had reached Chandigarh in a chopper around 12 noon and went straight to the chief minister’s farm house in Mohali.

The visit is being seen as an effort to placate Amarinder Singh, who wrote a letter to Congress president Sonia Gandhi on Friday. He is learnt to have said that giving the post of state party chief to Sidhu, a Jat Sikh, would upset the party’s senior leaders representing the Hindu community and harm the party’s prospects in the 2022 assembly elections.

In Meeting with Ministers, PM Modi Orders New Joinees to Dial Up Predecessors for Guidance